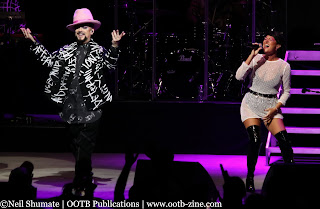 ROSE MUSIC CENTER AT THE HEIGHTS

The 80s were alive and well last night at The Rose; for many an evening of nostalgia as U.K. pop sensations Boy George & Culture Club and The English Beat took the stage.
Boy George & Culture Club (with original members Roy Hay, guitarist, and Mikey Craig, bassist) performed a set that included their 1982 debut album hit “Do You Really Want To Hurt Me?,” as well as “I’ll Tumble 4 Ya,” “Time (Clock Of The Heart),” “Miss Me Blind,” and an encore performance of their number one classic hit “Karma Chameleon.”
Each song was performed with talented back up singers (with many exceptional vocal solos) and an energetic backing band.
Soulful new wave singer Boy George’s voice never faltered and was complete with moments of Bowie-Esque vibratos.
An all around captivating performance that was entertaining and memorable with jacket and hat wardrobe changes.
The Beat opened the show with a groovy set dominated by classic ska and reggae riffs.
Vocalist Dave Wakeling gave rightful credit to Boy George by stating the iconic artist gave way to social change during the 80s just for being himself.
The band performed extended versions of General Public singles “Tenderness” and “I’ll Take You There.” Matt Morrish’s sax solos throughout the set could easily level with Dave Koz.
This tour will leave anyone of the MTV 80’s generation smiling wide and it will engross any later generations that want to hear a talented, experienced, well-represented presentation of that defining era in music, with five-star live performances.
See tour dates here. 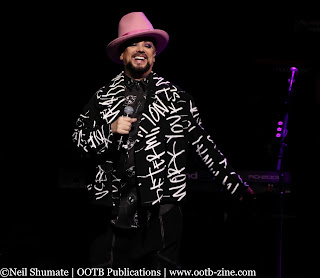