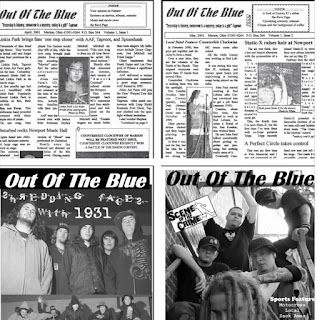 Out Of The Blue (OOTB) is a small, independent, self-funded publication that was founded in 2001 by two friends at a concert in Columbus, Ohio. Having a high school background in journalism—via the Harding Herald at Marion Harding High School—the duo took a survey at the concert asking fans which of the bands they came to see. After sitting on the edge of the downstairs pit and compiling the information, Editor-in-Chief Neil Shumate was asked what they would do with the survey results, and he stated: “We’ll probably think of something out of the blue.” Thus, OOTB was born March 2001 at Newport Music Hall with the first issue released April 2001.
Shumate has always had a passion for press, media and the arts—he released a newsletter (7B) in seventh grade at Baker Middle School, he also created a family newsletter during his youth.
OOTB began as a self-published monthly, black-and-white photocopied zine stapled together and distributed at independent businesses in the two’s hometown of Marion, Ohio and eventually distributed throughout central Ohio and circulated through a small national mailing list. (See Print Archives  |  See Digital Archives)
With ideas and help from numerous content contributors, the publication grew. We extend a grateful thanks to community support alongside contributors, venues, artists, bands, publicists, promoters, and colleagues—because of coverage opportunities and the continued support, OOTB has appreciatively produced exclusive content for the fans, by the fans. (See Previous Contributors)
Through the years, OOTB transitioned from print to a digital publication then to an all online webzine. OOTB has had hiatuses, including a period in which Shumate completed a Bachelor of Arts in Journalism from The Ohio State University, after which the hand-crafted website ootb646.com was established.
Following a lengthy pandemic hiatus, ootb646.com is now ootb-zine.com, a more streamlined online publication. (See ootb646.com Coverage Archives)